The Simplicity of Christian Leadership

Stand Up and Lead

Following Jesus can be scary.   If we are called to lead others in the Christian life, it can be terrifying.  The challenges and responsibilities of helping others follow Jesus can seem overwhelming.  Eternal destinies are on the line.  How do we lead others in holiness and godliness when it often feels like we can barely keep it together ourselves?  What does Christian leadership look like on a practical level?  The Apostle Paul puts the answer really simply.  He invites the lost and confused church of Corinth to follow him as he follows Jesus.  Christian leadership, at heart, means keeping our eyes on God and listen to what He says and calling to others to copy what we are doing.  This does not mean we have everything figured out.  It also doesn’t require that we are not scared.  It is determining to follow Jesus when the battlefield of life gets really intense.

If a soldier is going to be in the infantry in the US Army, he is trained at Ft. Benning, Georgia.  This is where they take raw recruits and mold them into leaders.  Upon arrival, these men and women are met by a statue that has come to symbolize combat leadership.  Officially called “Follow Me”, it stands outside the US Army Infantry School.  Featuring a charging soldier with an upraised arm and mouth open mid-shout, the soldier depicts the type of leader the Army is attempting to produce.  It represents the individual trooper willing to stand up and lead in the midst of battle.  “Follow Me” the soldiers exhorts as he charges forward to face the enemy.  This is the prototypical leader of troops according to the army.

Warfare is a scary business.  It is unnatural to most people.  Most soldiers are rightfully terrified when they first face combat.  Instinct tells us our best bet is to hunker down and hide.  This is the worst possible response.  It is the fastest way to lose the battle badly.  An army that loses sight of its initiative is ripe for defeat.  The picture presented in “Follow Me” is the army’s way to prevent this outcome.  When a battle is intense and most soldiers are frozen in fear, a handful of leaders willing to step forward and lead can make the difference.  Victory or defeat depends on men charging forward and leading when the enemies attacks seem the strongest.  Soldiers naturally just follow these type of leaders.

The same leadership dynamic is present in our Christian lives.  When hearing the truth of the Gospel, the Good News, many people come to the banner of Jesus with joy and celebration.  Like a nation in a time of war, they rally around the flag with enthusiasm.  Yet, when the conflict gets hot, fear, worry and the cares of the world take their toll, no matter how just the cause.  Consider the Parable of the Sower:

Then he told them many things in parables, saying: “A farmer went out to sow his seed. 4 As he was scattering the seed, some fell along the path, and the birds came and ate it up. 5 Some fell on rocky places, where it did not have much soil. It sprang up quickly, because the soil was shallow. 6 But when the sun came up, the plants were scorched, and they withered because they had no root. 7 Other seed fell among thorns, which grew up and choked the plants. 8 Still other seed fell on good soil, where it produced a crop—a hundred, sixty or thirty times what was sown. 9 Whoever has ears, let them hear.”  Matthew 13

Of the four categories of people set out by Jesus who receive the seed, only one produces a healthy crop.  Three out of four fail to show up in the face of opposition.  They scatter like sheep without a shepherd at the mercy of whatever predator comes along to devour them.  Their earthly concerns lead them to eternal errors.

Individual Christian leaders play a crucial role in preventing these losses.  We can make the difference between victory and defeat on this eternal battlefield.  We obviously cannot control a person’s choices to force them to make good decisions.  Their free will has been guaranteed by God.  But our leadership can shield them while they figure life out. We can help people see Jesus through the troubles of life surrounding them.  All it takes is standing up in the midst of the storm and exhorting them to “Follow me” and follow Christ together.

Satan is seeking to choke off the world with the thorns and brambles.  He uses peoples cares and worries to make it seem there is no way out but one that leads away from Jesus.  We can lead them on a different path, the one that leads to the abundance that Jesus has waiting for them.  We see this vividly lived out in Acts 27 while Paul is on his way to Rome.  He is being transported to face the Roman Emperor to stand trial.  The journey starts in chains and eventually ends in Paul’s execution.  It does not seem like the usual setting for a demonstration of great Christian leadership.  Yet, the man who writes that he learned to be content in all things shows godly leadership every step of the way.

A Leader in Chains

Paul’s Roman jailers have placed him on a ship headed to Rome.  A violent storm overtakes them while traveling.  It is something like a Mediterranian hurricane.  By the third straight day of the storm, it is so intense the ship’s crew is so desperate they throw their tackle overboard.  This refers to the rigging of the ship.  It is how they steer the boat.  Once they get rid of it, they have no way to complete their journey.   Can we imagine how miserable and fearful this time would be?  They spent days in a terrible storm, in an ancient wooden ship in the middle of the sea tossed about by waves with no way out.  It is no wonder that Luke writes:

When neither sun nor stars appeared for many days and the storm continued raging, we finally gave up all hope of being saved.

The professional sailors of the crew have completely given up hope.  They think all is lost and their ship is doomed.  The passengers are likely terrified and sick.  A literal storm of life has beaten them to the point that all looks hopeless…until God and Paul step in.  God wants to guide them out of the storm and He will use one of His people to do it.  Though Paul is in chains as a prisoner, God asks Paul to step up and be that man despite the circumstances.  An angel appears to Paul and tells him:

But now I urge you to keep up your courage, because not one of you will be lost; only the ship will be destroyed. 23 Last night an angel of the God to whom I belong and whom I serve stood beside me 24 and said, ‘Do not be afraid, Paul. You must stand trial before Caesar; and God has graciously given you the lives of all who sail with you.’ 25 So keep up your courage, men, for I have faith in God that it will happen just as he told me. 26 Nevertheless, we must run aground on some island.”

Leadership does not require Paul to be greater or braver than the others on the ship.  In fact, the angel’s words give us a glimpse into Paul’s mindset.  He is told not to be afraid, to have the courage and to not lose faith.  These are great indicators that Paul is afraid, needs courage and struggling with faith.  He is very much a regular person like us.  All great leaders feel fear.  But Paul knows the God to whom he belongs.  He knows God sent the angel.  Paul’s directions are therefore clear.  Regardless of whether the storm still raged and his chains, God was leading and Paul is determined to follow.  He invites those around him to follow him as he does so.  “Follow me as I follow Jesus” is Paul’s simple formula.

We may know the rest of the story.  Paul listens to God.  The people listen to Paul and all 276 people on board are saved.  After the 14th day in the storm, they run aground and the crew tries to abandon everyone onboard.  Because Paul stood up and led when others were terrified, the Centurion in charge listens to Paul and prevents this from happening.  The soldiers on the boat then plan on killing all of the prisoners to head off any escape.  Because Paul stood up and led, the Centurion overrules them and protects them.  All of the passengers, free or prisoner, make it safely to land under the leadership of Paul.  They are following Paul’s lead as he is following God.  It took just one man to change the fate of 276.  This is the type of power we have when we are following Christ.

Storms will come in our lives that are just as intense as the one that trapped Paul for 14 days.  The spiritual battle we fight will grow fierce. Friends, co-workers, family members and maybe even ourselves will be in danger of being pulled under and lost.  Our judgment will tell us all is hopeless.  Our emotions will try to convince us to give up trying and surrender.  Logic will impeccably argue that the safest thing to do is to keep our heads down and stay out of the fight.  This is the worst thing to do if we want to win the spiritual war that rages around us.  We are forgetting the same God who delivered Paul waits to lead us in power.

All it takes is one man stepping up and trusting in God to make a huge difference.  One Christian with a clear view of Jesus who is willing to stand up while everyone else is filled with fear can change everything.  This is the simplicity of true Christian leadership.  Follow Christ is always our first responsibility.  It is the core of our life as a disciple.  Leading others requires us to just call to others to follow along after us as we do so. 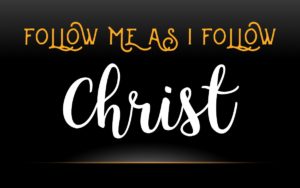 Tom Neary is loving life as an on fire follower of Jesus. Helping others see to the glory of Jesus and to live abundantly in Him is his mission. He is a Christian, husband, father, lawyer and a regular guy called to teach God’s Word simply. To check out more of what Tom is doing visit pastorunlikely.com and calvarycatonsville.com. Tom has also just launched a podcast “Come Let Us Disciple” focused on informal discipleship.

pastorunlikely.com/
Like what we do? Take a second to support us on Patreon!

13 Questions To Ask This Thanksgiving

No Result
View All Result